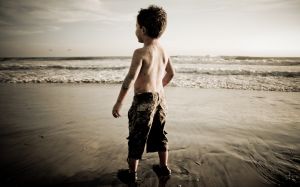 As I mentioned in my last post, this year I’m taking part in the 12 x 12 in 2012 picture book writing challenge. Some of the participants are using ideas they came up with during PiBoIdMo in November, which gives them a great starting point. I didn’t do PiBoIdMo since I was busy entrenched in NaNoWriMo at the time. This means I’m going into 12 x 12 without a stockpile of ideas to pick and choose from. I was lucky enough this past week to have been inspired by a particularly hot day (actually it was about three hot days in a row). Sometimes inspiration can just strike like that, other times it doesn’t. I’ve still got eleven months of ideas to find (not to mention an extra six during NaPiBoWriWee if I do that too).

So how does one go about finding picture book inspiration?

These are some of my favourite ways to get inspired:

– Observing children at play. I’m lucky enough to have two little muses running around my house and they provide fantastic inspiration. It’s hard not to find story ideas when watching children play as they have such vivid imaginations themselves. You find yourself immersed in their world and you’re brought down to their level. If you don’t have children of your own and you’re not a teacher or childcare worker, seek out places where you can watch children play: a local park; the McDonald’s playground; friends/family with children. Don’t forget to take a notepad!

– Sitting outside. I’ve always found sitting outside and just absorbing the world around me to be a great way to get inspired. Take a notepad or laptop and find a nice spot in the garden/at the park/at the beach/by the river to sit and let your senses take over. What can you see, hear, smell, taste and feel? Try to see the world from a child’s point-of-view. Is that a fairy hiding in the roses? Is that a pirate ship out at sea? It doesn’t all have to be fantasy, of course. A game of soccer could be the starting point for a story about being left out/trying your best/trying something new. If the weather is bad, try sitting and staring out the window.

– Draw on your world (aka Write what you know). I live on a farm and I draw on those farm experiences to find inspiration. A mouse in the hayshed? What if he was trying to find a new home for his family? Think about where you live and how you can draw on it. Perhaps you live in the city or by the beach or in a small neighbourhood; what unique experiences can you use in a story? Look at your world from a child’s perspective; what would they see? What about an animal?

– Go places. Go to the zoo and watch the lions/meercats/penguins. Go to the museum and imagine stories behind the exhibits (Who flew that plane and where did they fly it? Was that dinosaur shy or boisterous?) Go to the beach and observe the people/families/animals. What are their stories?

As you become inspired, just keep one important point in mind: Picture books are written for children, so when crafting your character (whether human, animal, monster or alien) make sure your character has a child’s perspective. Children should be able to relate to the character and the character’s situation.

How do you get inspired? I’d love to hear where you find inspiration when writing picture books.

12 thoughts on “Writing Picture Books – 4 Ways to Get Inspired”

In honour of April Fool's Day, share with me your favourite books with a big twist or books where the author had you fooled. #aprilfools #aprilfoolsday #april1st #mysterybooks #plottwist #surpriseending #mysterywriter #redherring #murdermystery #bookstagram #readersofinsta #readersofinstagram #agathachristie #themurderofrogerackroyd #danbrown #angelsanddemons #graemebase #theeleventhhour #markhaddon #thecuriousincidentofthedoginthenighttime #charlaineharris #deaduntildark #sookiestackhouse #jkrowling #harrypotterandtheprisonerofazkaban #harrypotterseries #harrypotter #rickriordan #percyjacksonandthelightningthief #percyjackson
Hey reader and writer friends, looking for something to occupy yourself during isolation next weekend? The authors of the Drowned Earth series are hosting a Facebook launch party! There will be games, the opportunity to meet the authors and prizes (including the boxset of all books in the series!) Come join in the fun! You can find the event on my Facebook author page: facebook.com/JoHartAuthor #authorevent #booklaunch #boxset #facebookparty #clifi #dystopian #speculativefiction #australianfiction #auswrites #authorsofinstagram #writersofinstagram #writersofinsta #bookstagram #readersofinsta #bookloversofinstagram #bookgiveaway
I'm so excited! 🤩 I got some awesome news tonight, so I'm celebrating. I just found out my novella 'The Jindabyne Secret' is a finalist in the Aurealis Awards under the category Best Young Adult Short Story! For those who don't know, the Aurealis Awards are an annual award for Australia's best sci fi, fantasy and horror fiction. It's one of my writing dreams to be a finalist. I can't stop grinning! 😁 Big shout out to my amazing editors at Deadset Press @aussie_speculative_fiction #aurealisawards #australianfiction #auswrites #scifi #speculativefiction #clifi #yafiction #youngadultbooks #writingcommunity #writersofinsta #authorsofinstagram #shortstories #novella #celebration🎉 #pinkwine #moscatowine #strawberry🍓 #chocolate🍫 #ferrero #excited😍 #dreamscometrue✨ #sohappy😊
Continuing my reread of The Southern Vampire Mystery series. Autumn is definitely making itself known--first day pulling out my ugg boots and hoodie. It's a great day to be snuggled up on the couch reading. #readersofinsta #readersofinstagram #bookstagram #charlaineharris #deadtotheworld #southernvampiremysteries #sookiestackhouse #ericnorthman #alexanderskarsgård #trueblood #vampirefiction #vampires #paranormalromance #sexyvampires #bookboyfriend #autumnvibes🍁 #snuggleduponthecouch #couchpotato #uggboots #socialdistancing