As part of Aussie Author month I’m going to be doing a series of blog posts focusing on some of my favourite Australian authors—authors who have inspired me in my own writing. 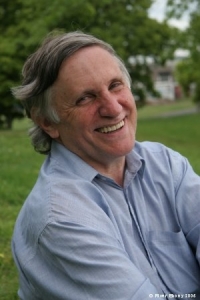 For the first post I want to focus on one of my all time favourite authors: John Marsden. I started reading John Marsden as a teenager and he immediately became my favourite teen/YA writer. He also inspired me to really strive for my writing dream; knowing that an Australian could become such a well known author, not just here, but overseas as well, was a big push for me.

Marsden has written a multitude of books over the years, primarily aimed at teens. At one stage I had read every book he’d ever written. In year eight, my English teacher read our class

Tomorrow When the War Began (which I’d already read by then)—every student in my class loved it and there was an influx in the library to borrow the next book in the series. Even the boys.

So how is it that Marsden, nearly a decade before the Harry Potter phenomenon, inspired teens, including reluctant male readers, to get reading?

This would have to be the number one factor in the appeal of Marsden’s books to teens. Marsden has a way of writing teenage voice realistically that draws teens into the story. Teens feel like they’re reading about someone their own age—they can relate to the feelings and thoughts of the character, because it’s how they think and feel. In particular, I find his ability to write in the voice of a teenage girl particularly brilliant (how many grown men could channel the voice of a teenage girl so realistically?).

“To be honest, which I swore I’d be, we’d all had those delusions at times. They were only daydreams, to liberate our families, to fix everything, to be heroes… In reality the prospect of doing something like that was so horrifying and frightening that it made me ill to think of it.” (Tomorrow When the War Began, pg. 232)

The characters in Marsden’s books come alive from the first page and make you want to know their story. Part of that is their voice, which I mentioned above, but it is also the layers of depth each character

possesses. In books like Letters from the Inside and So Much to Tell You, the stories of the main characters unfold layer by layer. From the beginning the reader knows there is more to this character, some secret, and as the story unfolds we get glimpses of the secret, until we find out the whole story. In other stories, such as the Tomorrow series, we see the main character put in tough situations and continually growing as a character through these situations.

“…I started trembling and sobbing and hugging myself. I leaned against the wall then slid down until I was on the floor. It seemed like something outside me had taken control. It shook me like I was a washing machine. I knew what it was of course. The image of Shannon, lying there naked and tied up, her blood, the death that I saw in her eyes: Where was I supposed to put that?” (While I Live, pg.266)

“…Lisa came in, went to her bed and lay on it face down. And after a few moments she began crying! I could hear her. And I could see her shoulders shuddering. Lisa, the strong one, who never cries! It got worse: her crying became louder, uncontrolled, sobbing. From deep, deep down… I fluttered around the dorm wanting to help her.” (So Much to Tell You, pg.39)

“… we ran the way rabbits do when they get a sniff of the warren and think they can just make it. We put our ears back, kept close to the ground and went for it… The fence loomed up at me. I dived to go under it. Still like a rabbit. Beside me Fi did the same. As we went down, the first shot wailed above our heads.” (Darkness, Be My Friend, pg. 234)

If you (or your kids) have yet to pick up a book by John Marsden, I highly recommend picking one up.

If you have (or write for) preteen boys, try Staying Alive in Year 5. For teen girls, try So Much to Tell You. For teen boys, try Dear Miffy. And everybody should read Tomorrow When the War Began at least once in their lifetime, it’s a Aussie literature must-read.

A side note in regards to Aussie Author Month:

One of the aims of Aussie Author month is to raise awareness and funds for the Indigenous Literacy Project – a project that aims to raise Literacy levels amongst Inigenous Australians living in rural and remote communities. You can learn more here: http://www.indigenousliteracyproject.org.au/ and you can donate to the project as part of Aussie Author month here: http://www.gofundraise.com.au/page/ausbooks